When we started off the day our plans were fairly simple. We were headed to visit Walnut Hill School, then lunch at Shady Maple, shopping at Goods, and home to get Dawdi for an appointment. And for the most part every part of the morning went off without a hitch.
The visit to the school was amazing—everything I had imagined and more. If I counted correctly there were nine families represented by 19 children, one being Mennonite. When we arrived, the teacher asked one of the first graders to bring us the basket filled with candy for us to take a piece and the welcome book.
While the children did their lessons I read through their book. Each one had been asked to fill in the blanks of several questions including “I like when my mother…” and “I like when my father…” Some of the answers were hilariously sweet. I think my favorite was the little boy who said he liked when his dad let them eat a lot of candy and when his mother baked chocolate cakes.
The room was set up for all ages including a chart that showed the German cursive and print letters as well as the English ones. Encouraging signs were up all around including “Laughter is a smile that burst” and “You can always be a better person tomorrow than you are today.”
The children all filed to the front of the room and sang us three songs chosen by the girls we knew there. It was so sweet to hear their voices, though one little boy was tone deaf. Of course he was singing the loudest!
After school we went to eat and shop, then headed back home. Sometime around six, we got the bright idea to get out the horse and carriage and take a ride down to the petting zoo. It wasn’t far away and the horse needed to get out and run a bit.

First I need to tell you that ‘standard’ buggies are small, but somehow we managed to cram four adults and two children into the space created for two adults and two children. And though the horse wasn’t excited about pulling all that weight up a hill, he did it anyway. Dusty is a fine horse.
The petting zoo was fun. We bought handfuls of feed and visited with all the animals. Goats, peacocks, deer, various waterfowl and a Scottish Highlander named Susie. But my favorite was the little pig who greeted us with a snort and a wagging tail.
Everything was going just fine until we had to back the horse up to leave the petting zoo. The wheel on my side of the buggy gave a loud pop, but we didn’t have far to go and had to get home somehow. So off we went. We barely got a half mile down the road when the rim started coming off the wheel!
Afraid we wouldn’t be able to make it home, Sadie pulled the buggy into someone’s driveway. (I found out later than she knew the person, but they weren’t home.) Across the street a family was hard at work picking cabbage. One of the men came over to help. He pushed the rim back on and said he thought it would get us home. It got us down two houses.
There another Amish man came down from repairing a roof to help. “We just need something to keep the rim in place,” he said. And what did they use? Duct Tape! Yes, you heard right. Now you know it’s true, men are the same all over. 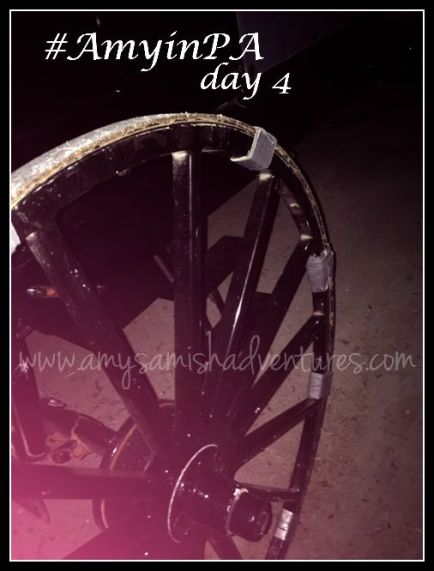 We knew the duct tape would eventually wear through on the road, but had to give it a try. Our first helper, Henry, scootered alongside us as we walked Dusty toward home. (I should pause here and say that Sadie and her niece suspect that Dusty might have been a racehorse before coming to her farm and he does not like to walk!)
The tape held for a bit. Meanwhile it’s getting darker and darker. Sadie turned on her buggy light and we knew that home is just across the field but it seemed miles with a busted wheel.
We have to pull over at another house. This one belongs to a man and his wife who are ex-Amish. He comes out to help Henry who is still scootering next to us. The duct tape has worn through. What should they do? Add more duct tape! Sadie is worried about Dusty and the wheel so after it’s ‘repaired’ the man takes us (me Stacey, and the girls) back to the house while Sadie and her niece continue to drive the carriage.
Back at the house. I wait with the kids while Stacey takes her car to check on our friends in the carriage. Thankfully, everyone got home safely. But if I hadn’t been there, I wouldn’t have believed it.
Now I’m ready for a nap. Or at the very least another whoopie pie.

Amy writes romance: Amish, contemporary, and a few historical. Some are sweetly inspirational; some are a little sexy. All have a dash of humor and a touch of whimsy. Oh, and Amy writes mystery too! But that's another site...